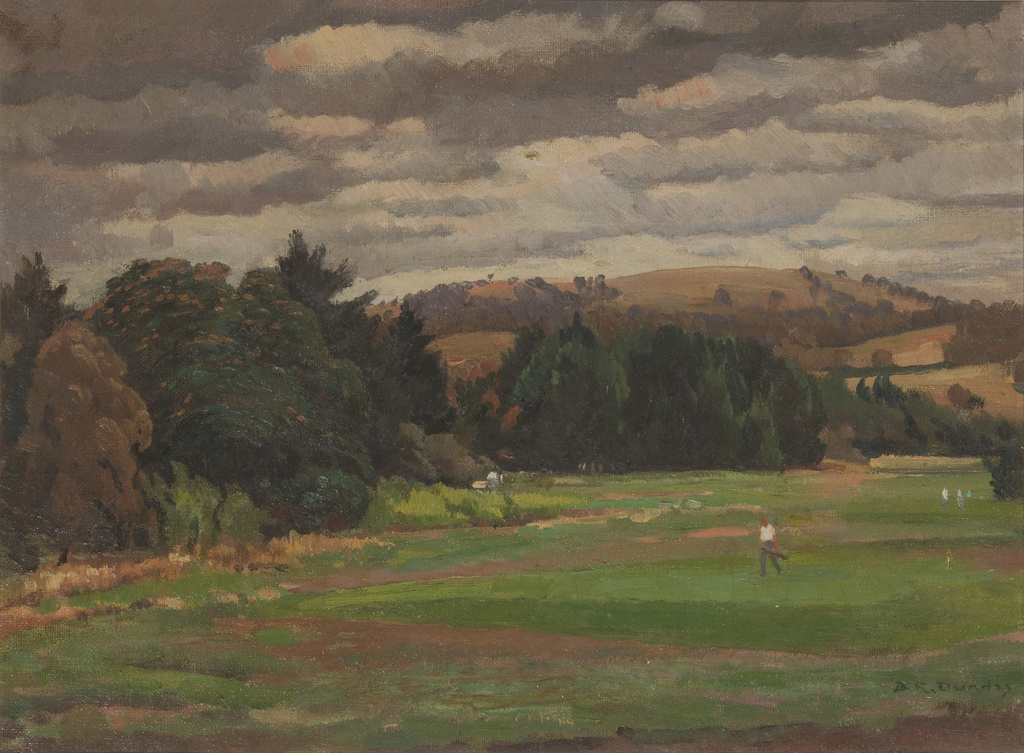 Cloudy day on the links

Douglas Dundas was born in country New South Wales and spent his early years on his family’s property near Inverell. He always wanted to be a painter and a meeting with fellow artist Elioth Gruner in 1921 cemented that desire. In 1922 he moved to Sydney and enrolled in evening classes at the Sydney Art School (run by Julian Ashton).

In 1927 Dundas won the Society of Artists’ Travelling Scholarship which took him to London where he studied at the Regent Street Polytechnic (1927-28) and to Italy and France (1929). In France he studied briefly at the Académie Lhote in Paris where students included fellow Australians Anne Dangar and Grace Crowley. Following his return to Australia Dundas took up a teaching appointment at the National Art School in Sydney (1930) where he remained until his retirement in 1965.

As well as maintaining an active career as an artist and teacher, Dundas was a tireless worker for artists. He was a Trustee of the Art Gallery of New South Wales (1949–1970) as well as an executive member of the Arts Council of Australia (NSW Division) and was President of the Society of Artists (1948 – 1961).

Works by the artist are included in the collections of the National Gallery of Australia, all state galleries and regional, institutional, corporate and private collections in Australia, England and America.

Dundas was a regular visitor to Canberra from 1940 until 1964, his visits usually coinciding with the summer vacation period of the National Art School. The summer light of the open valleys and surrounding mountains provided a strong impetus for the artist’s pictorial imagination and some of his most memorable works were produced during these visits to the nation’s capital.

Cloudy day on the links depicts the golf course located at Yarralumla, submerged under Lake Burley Griffin since 1963. For Dundas the hot, vibrant light of mid-summer Canberra was especially appealing. The light literally highlighted the underlying structures of the natural topographic features to create an harmonious and lyrical composition in which the artist’s attraction to the landscape is clearly evinced.