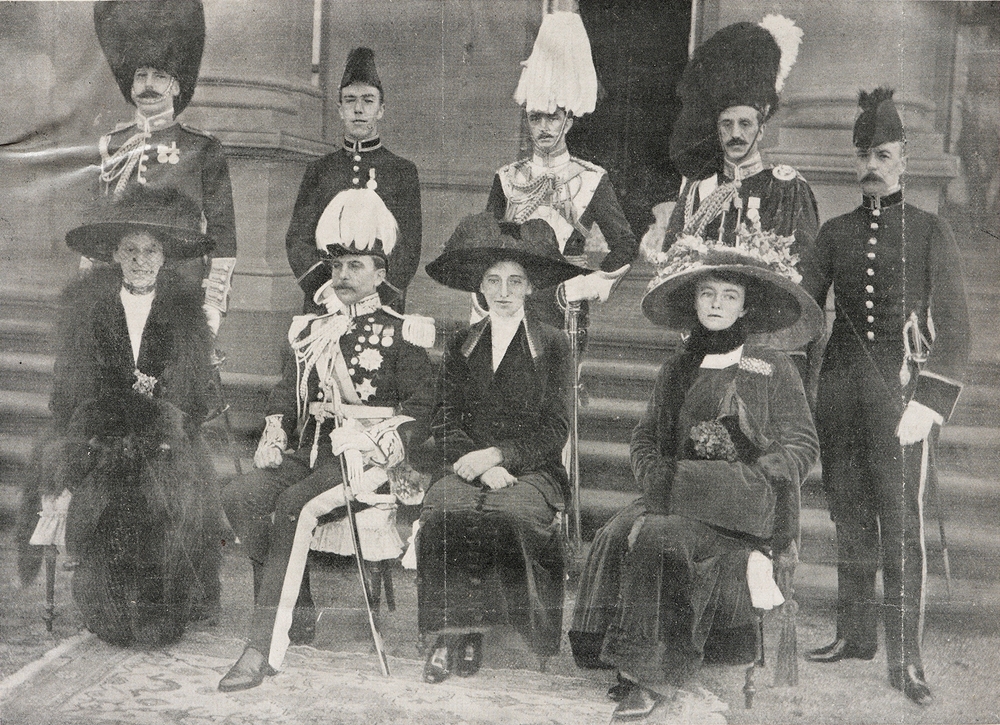 In June 1911, a British family of four commenced the long sea journey from England to Australia. The two children, six-year-old Thomas and four-year-old Judith, travelled with their chaperones via the Cape of Good Hope. Their parents Lord (Thomas) Denman and Lady (Gertrude) Denman took a different and more direct route. Accompanied by their own sizeable retinue, they embarked from Marseille and took the searingly hot journey through the Suez Canal and Red Sea.

Tom and Trudie landed in Melbourne in late July 1911 and were driven in an open-topped carriage from St Kilda Pier to Parliament House. The children were still at sea.

One can only imagine the trepidation and excitement that this family felt during their ‘split-in-two’ journey across the world. After a spectacularly productive two years, an exhausted Trudie would return to Britain in 1913. Tom was back home, prior to completing his post, a year later in 1914.

Australia’s fifth Governor-General and his wife had arrived at a critical time for the recently-federated Australia. National projects were underway in transport, industry, defence and trade and the country was also starting to develop its own cultural identity. Now emerging from its role as a British colony, it was looking outward to gain more independence on the world stage. But, alongside this growing wealth and optimism, looking back, we also see the irony of the country’s crushing discrimination against Aboriginal Australians in this period. Recognition of this sad story, in the same frame as the happier one of the Denmans’ contributions, was to come much later in the history of Australia and its capital.

The Denmans were far from being an aloof couple. They enjoyed great popular support while in Australia. Trudie contributed substantially to the success of Australian bush nursing and significantly to the National Council of Women. Lord Denman strongly supported the development of Australia’s defence forces and would become a lifelong advocate for Australia on his return to Britain.

Canberra Museum and Gallery’s fascinating new exhibition, Peace, Love and World War: The Denmans, 1910-1917, Empire and Australia, explores both the Denmans’ time in Australia and the period of their immediate return to Britain as it faced the prospect of world war.

But it is for their role in the official naming of Canberra that the Denmans have come to particular prominence in the Australian story. The official ceremony took place on Capital Hill on 12 March 1913 at the laying of the foundation stones of Canberra’s commencement column.

One hundred years later, in 2013, a highlight of Canberra’s centenary year was a toast to this earlier ceremony. It was preceded by reflections from cherished Aboriginal Elder Aunty Agnes Shea, from Prime Minister Julia Gillard, from ACT Chief Minister Katy Gallagher and from Governor-General Quentin Bryce. This conjunction of four of the nation’s most influential women as they reflected on our centenary, contributed of course to a highly resonant event.

It not only celebrated the progress of Australian women over one hundred years, a story which Trudie herself would have greatly relished, but it also recognised the importance of Aboriginal Australians in our nation. On our centenary occasion, Aunty Agnes Shea asked those present to imagine the difference if, one hundred years ago, we had possessed the understanding we now have of the traditional owners of Australia, and of their connection to this ancient land.

Importantly the event also presented a powerful echo-through-time. As a part of that distant ceremony in 1913 Trudie had the role of reading aloud, for the first time and to great applause, the official name of the new capital. Her strong and elegant articulation of ‘Canberra’ was henceforth adopted as the official pronunciation. Governor General Bryce, on repeating the word ‘Canberra’ with equal resonance 100 years later, explained her understanding of the word as ‘...a hybrid… which connects both Aboriginal and non-Aboriginal sources’. She claimed it as ‘a name rooted in traditions – of the land and of local communities’.

I encourage you to reflect on the idea of the ‘hybrid’ as you explore this wonderful exhibition, whether you visit it on site or online. We may come to share an important modern insight as we ask ourselves whether both national identity and personal identity are not both fundamentally hybrid at their core.

Though the Denmans’ stay in Australia was but a short slice of a lifetime, their individual contribution shaped Australia’s national identity as much as their individual experiences of Australia must have shaped them personally. Their influence contributed to the way in which the British people would view Australia in the following period.

Canberra Museum and Gallery is grateful to the many contributors to the exhibition: guest curator, Dr David Headon; the many institutional and private lenders to the exhibition; Her Excellency Menna Rawlings CMG, British High Commissioner to Australia, for her opening of the exhibition in Canberra; and to sponsors King O’Malley’s, and Denman Prospect - a part of Capital Estate Developments.

Image
Photographs of the arrival in Australia of the Denman Vice-Regal party, 31 July 1911,
taken at St Kilda Pier and Government House for Table Talk magazine [detail]
From the Lady Barttelot album, Collection of Lady Margot Burrell