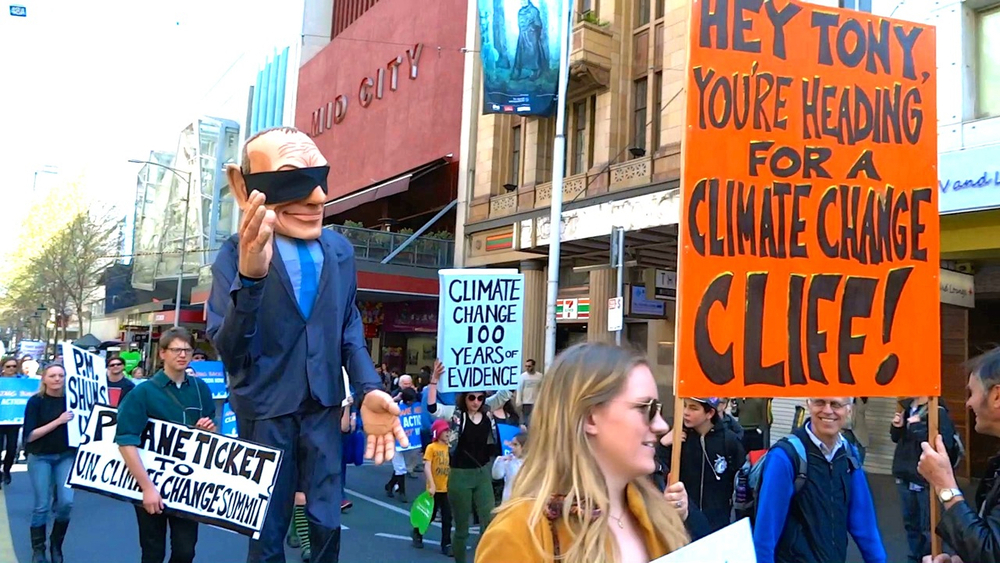 I was inspired by Tony Abbott. Watching his 2013 election night victory speech … I knew with a deep certainty I was going become an activist.

The 2014 “no cuts” budget galvanised me into creating a 3.3m-high, stilt-walking puppet, and “Tony Liar Pants on Fire” was created. Hilary Talbot did a skilled job in creating a neutral characterization of Tony Abbott that people of all political persuasions have engaged with. Mad As Hell used video of the puppets for a skit. The puppet soon after was renamed “Real Big Tony”. 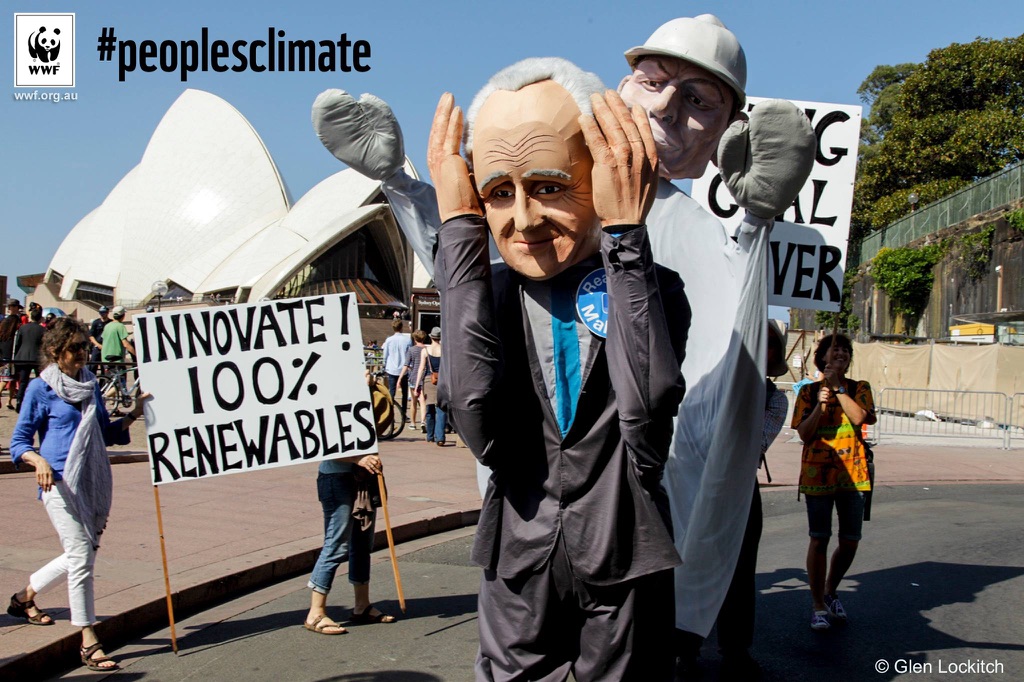 The media interest in the puppets led me to build a Malcolm Turnbull head when Abbott was ousted.

The “Ghost of Tony” was also created.

The puppet designs got smaller. The original set up was an articulated puppet frame that I built with a rotating and nodding head and a 2m arm reach where the puppeteer looks out through the shirt front/tie. This was used without stilts. I then moved to developing chest frames to secure the head to the puppeteer’s shoulders.

During the 2016 election, I travelled up the coast from Bateman’s Bay to Brisbane with Tony and Malcolm, finding assistants to get into the puppet heads at each stop. The skill of finding and working traffic jams with the puppets was refined during this time. A video was created based on the song Would I Lie To You Honey? 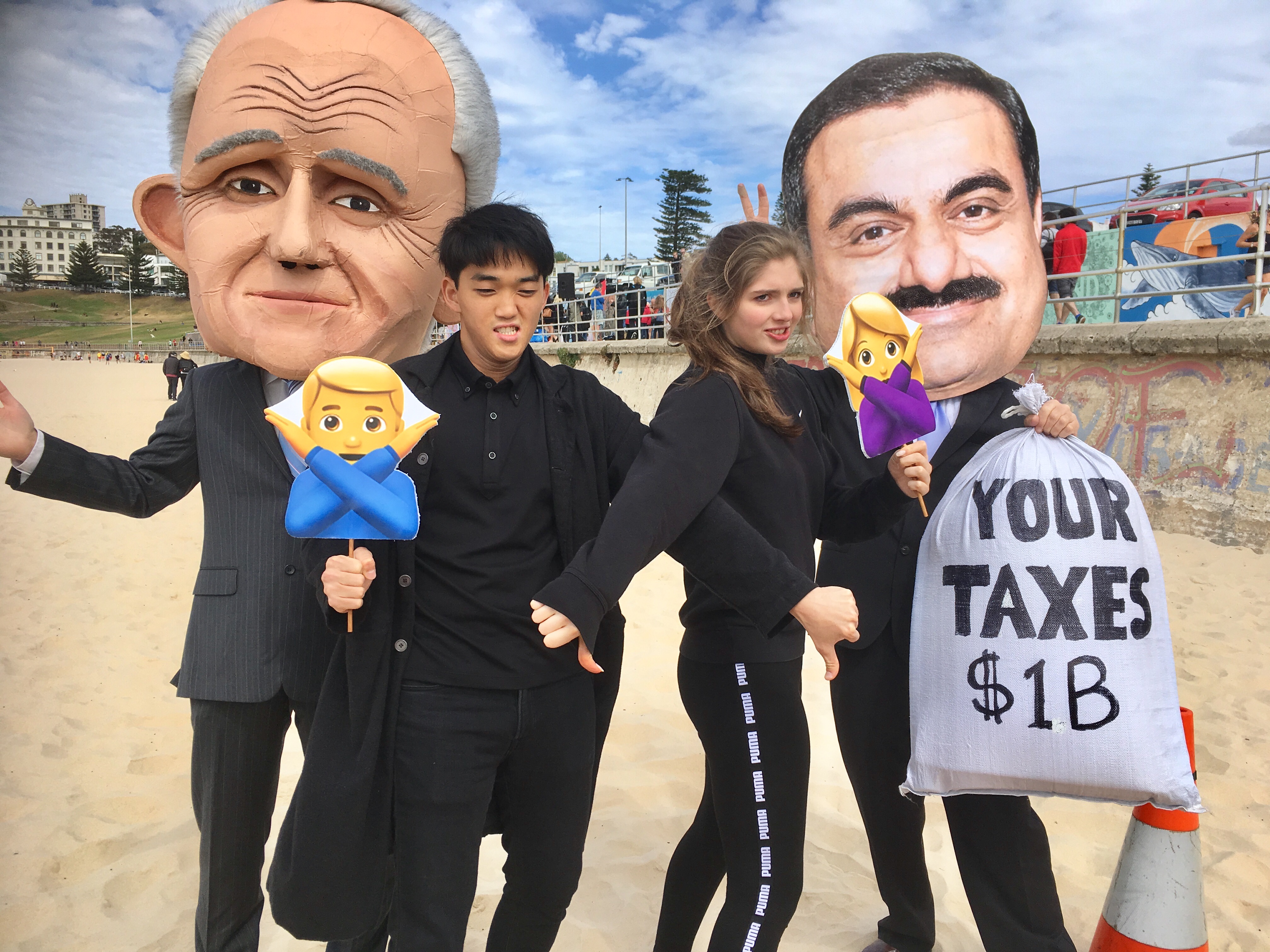 The puppets at the Stop Adani rally on Bondi Beach in 2017 got very good media coverage. I experimented with a 2-dimensional mask of Adani which was effective for the cameras. At Hilary’s suggestion I had developed emoji signs to add to the shareability of the social media images. 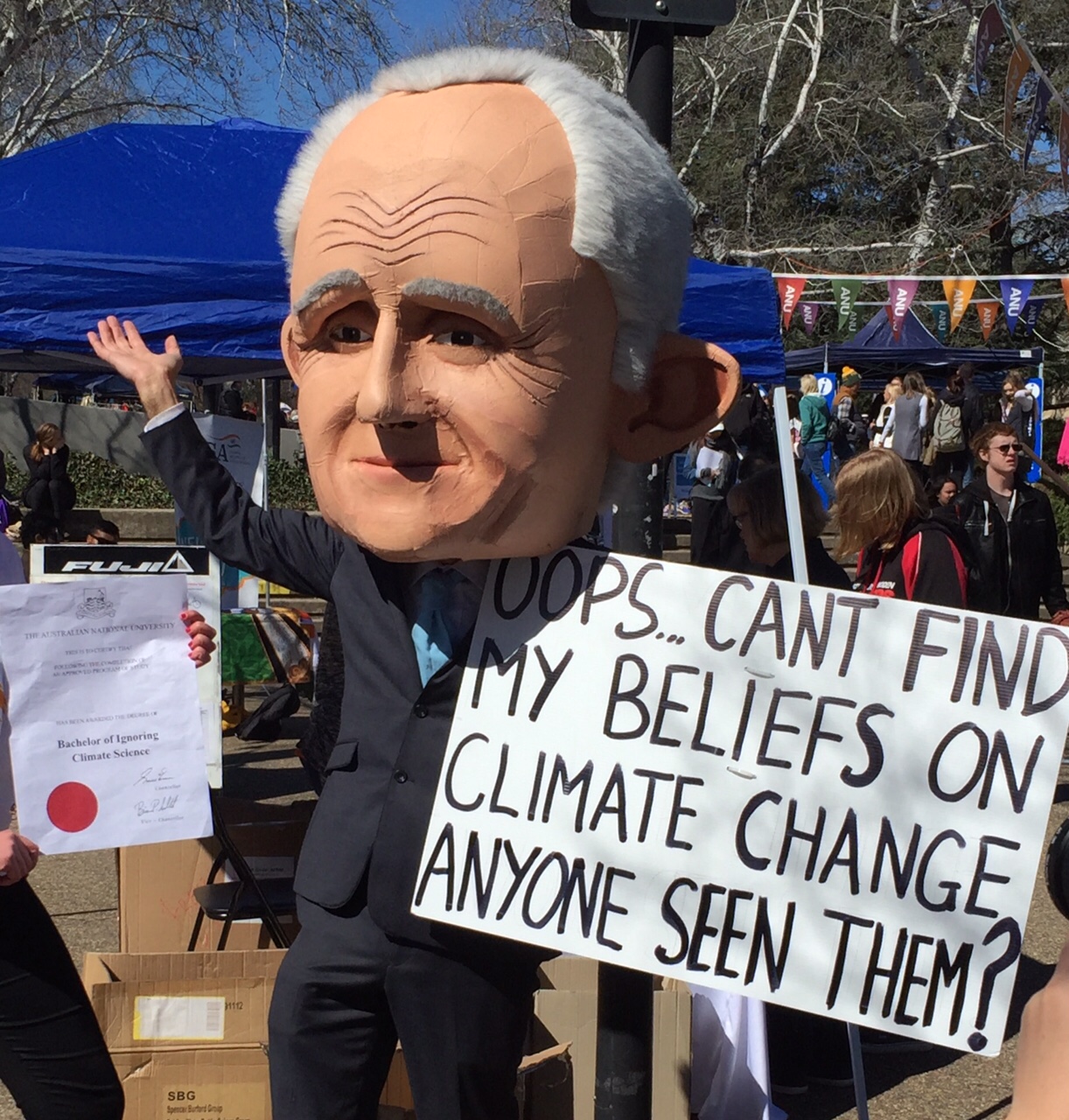 Humour is a key element of the puppet cartoons as well as hand written signs. The puppets can provide the media with a single frame “cartoon” or a skit that can add vital detail to the message of an action. Media and social media images link the issue to the politicians responsible. Supporters have fun interacting with an easily shared, humorous “cartoon” to balance complex and challenging issues. 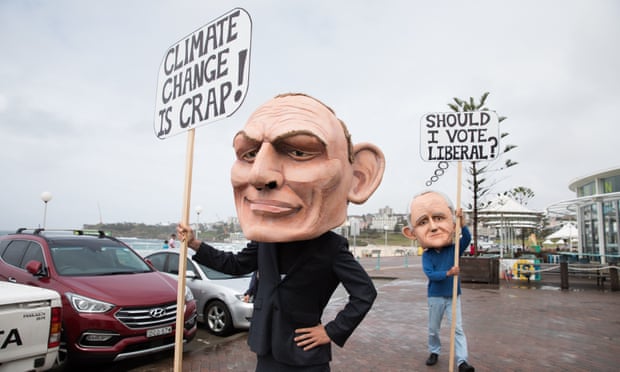 The Wentworth by-election brought the full range of news media to one electorate and the cameras made good use of the cartoons I presented. I had to make it clear to the SMH that I am an independent activist and am not a GetUp puppeteer. 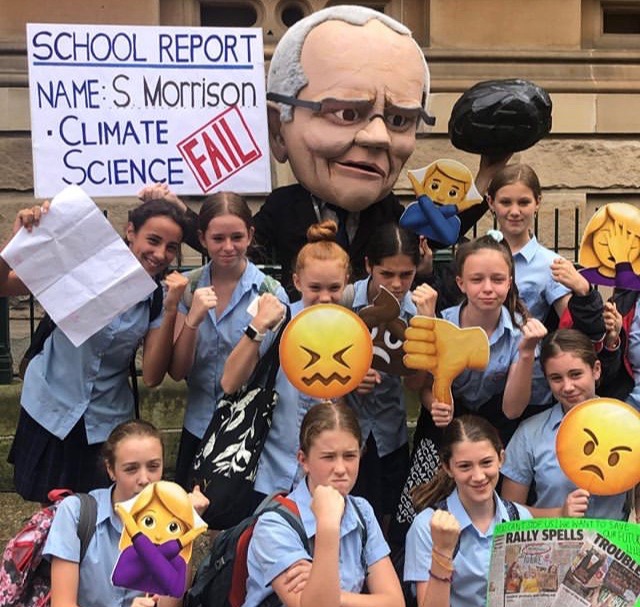 The November 2018 Climate Strike at Sydney Town Hall. There was absolutely no room to move at this spot in the 2019 rally.

A Scott Morrison head and a Bill Shorten head were built in 2019. These were used in a Stop Adani rally where Shorten faced off Morrison at Parliament House during the election. This is the most complex skit I have created with nearly 20 signs.

Mr Morrison will be in Sydney for the September 20 Climate Strike at the Domain. The cartoon will be of a fire blackened firefighter holding a hose with a Fire Danger sign behind showing “Catastrophic”. Mr Morrison will be wearing an “I Love Coal” cap and “playing” with a very big box of matches.

I deeply appreciate the invitation to include the puppets in the Activism: forces for change in Canberra exhibition.  In exploring the exhibition, I was delighted to recognise my place the community of innovative social activists. The exhibits give me a sense of connection with the long history of activism, extending beyond the ACT and even beyond Australia. The work of activists is often "of the moment" and not always well preserved, documented or represented. Thanks to Canberra Museum and Gallery for re-presenting the work of activists in the ACT.

The views expressed in this blog are the author’s rather than CMAG’s. This series of blogs is intended to share stories of people working for change in the Canberra community and are related to the exhibition, Activisim: Forces for change in Canberra on show until Saturday 2 November. If you would like to share your story of activism in Canberra please do contact us.