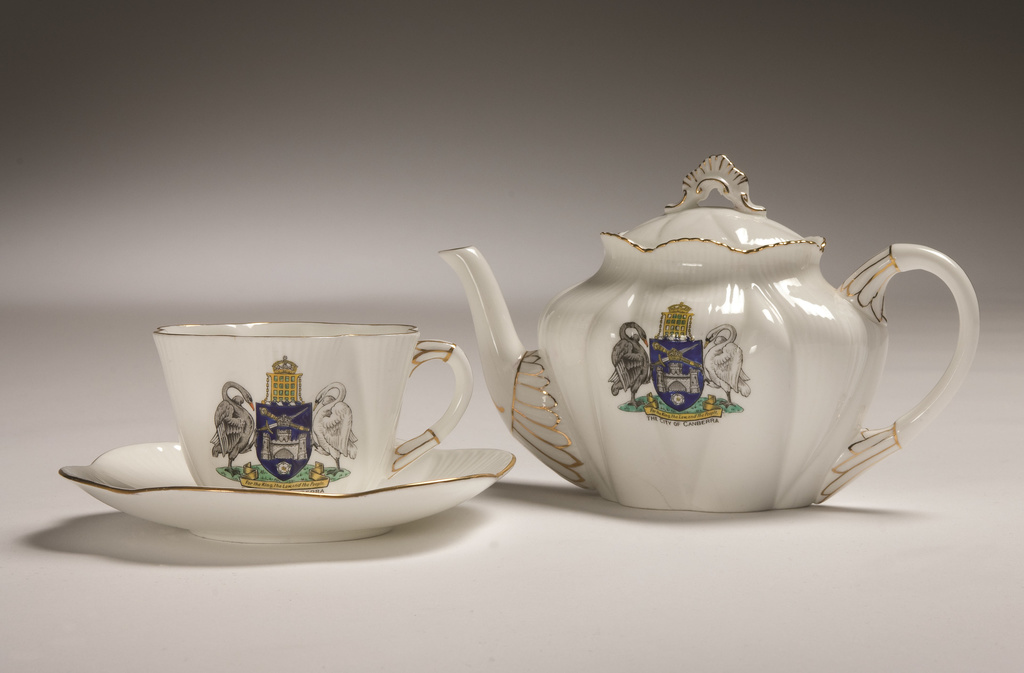 c.1928-45, bone china with transfer print of the Canberra Coat of Arms

The Dawn Waterhouse Collection includes numerous items of china that were originally offered for sale as mementoes of Canberra and the surrounding region from around the 1920s until the end of the 20th century. Many of the items acquired by Dawn Waterhouse between 1988 and 2008 were created and issued specifically in the context of the tourist trade and to cater to a buoyant and nationalistic pride in the ‘bush capital’ in the early years of its development, and at a time when motoring as a leisure activity was becoming popular with travellers.

Promotion of Canberra has served many purposes, from affecting tourism and migration to the development of the local community’s sense of place within the region. Such purpose is evident in the production of souvenirs and guidebooks of the city and its famous icons.

In August 1923, in near gale-force winter winds, the first sod was turned at the site of the provisional Parliament House of the Australian Federal Government in Canberra. Percy G Stewart, Minister for Works and Railways, performed the ceremony in front of approximately 1900 people assembled on Camp Hill: The sacred soil was carried away, not only in bags by many good people who had much better dirt at home, but also on their clothes and their ears.

J Gibney, Canberra 1913-1953, AGPS Press, Canberra, 1988 Some of this soil was fashioned into a pinecone by fourteen-year-old Doris Todd, who came to Canberra that year with her parents. Her father Robert Todd was a plumber’s assistant at the provisional (now Old) Parliament House. The pinecone souvenir is a homemade souvenir of a unique occasion, created by new residents in a new city. They give a personal perspective to a nationally significant event.