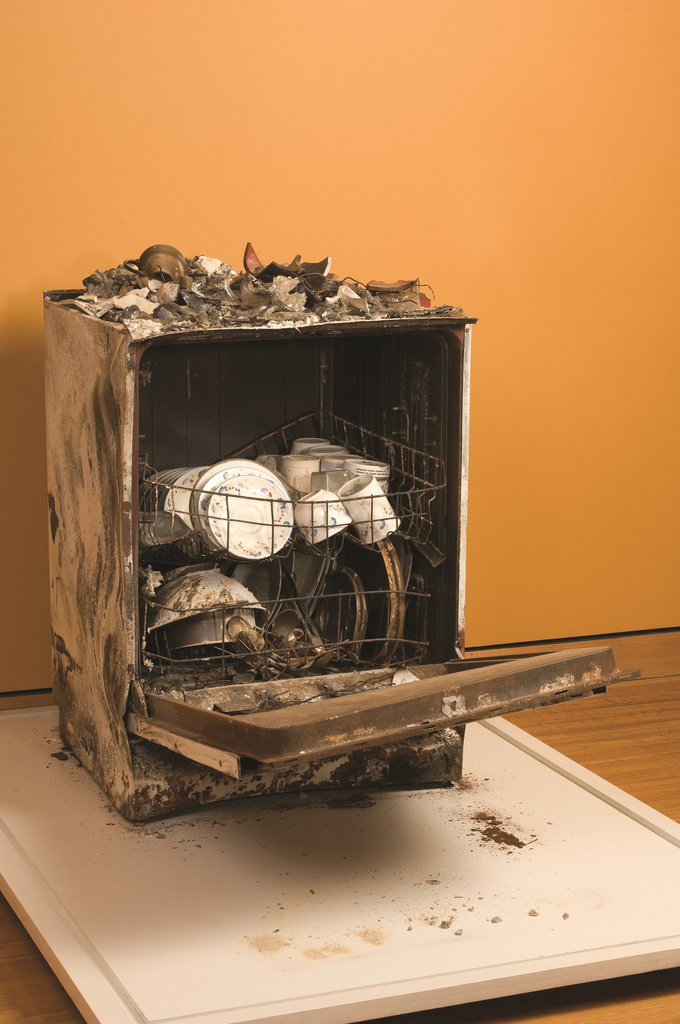 This dishwasher’s broken and seared form was fashioned by the shattering events of 18 January 2003 when a firestorm burnt almost 70 per cent of the Territory. Four Canberra residents died and many others, including a helicopter pilot, were severely injured. Five hundred houses were lost across eight suburbs and three forestry settlements.

There were many tragedies involving animals in the 2003 Canberra firestorm. Horses in agistment paddocks and stables died, as did many domestic pets. At Tidbinbilla Nature Reserve graves were dug to bury the many dead native animals. A surviving koala – named Lucky after the event – although badly burned and traumatised, lived until April 2008 and became a symbol of pluck and endurance for residents of the bush capital. Irreplaceable heritage sites were lost in Tidbinbilla Nature Reserve and Namadgi National Park and the beloved Cotter picnic grounds and pub were also destroyed.

Hundreds of people lost precious personal items to the fire: photographs, memorabilia and personal effects, the things kept as reminders of the great and small occasions of their lives and those of their loved ones. Beloved gardens were reduced to charred remains by an event that laid bare the landscape of the city. What emerged from the disaster was the knowledge that Canberra, city and region, had a highly developed sense of community, quite apart from its role as the national capital.

The fully loaded dishwasher is a striking symbol of the ferocity and speed of the firestorm that sweep across Canberra’s western suburbs. Amongst the debris on top of the dishwasher is the charred remains of a mobile phone that was charging on a shelf which came crashing down as the fire raged through the house