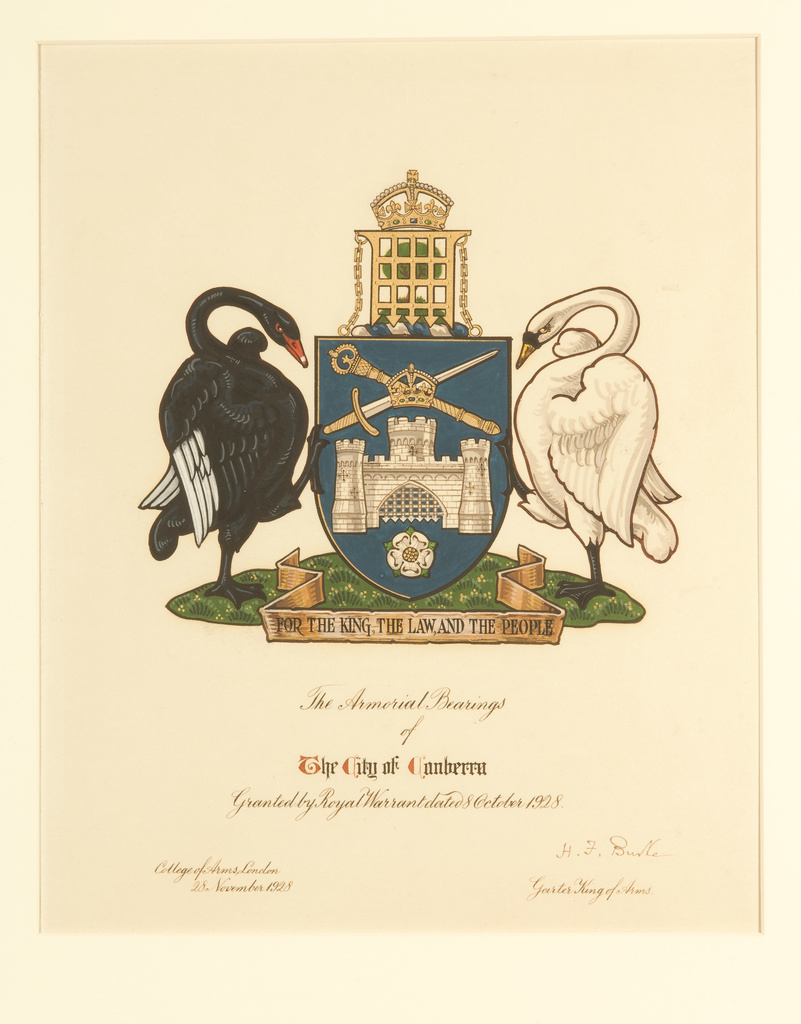 In August 1927 the Chief Commissioner of the Federal Capital Commission (FCC), Sir John Butters, announced a competition for the design of a coat of arms for the FCC and the City of Canberra. C R Wylie won the contest to design and draw the Armorial Bearings and his designs were duly sent to the College of Arms, London, in April 1928.

Wylie described his design in an article in the Royal Australian Historical Journal, Vol XVI, 1930 as follows: After much discussion of the various designs I sent in, the blue field with a white castle representing a capital city was adopted, with above it, crossed saltire-wise, a sword of Justice and a parliamentary mace, having an Imperial crown at their point of intersection; below everything, at the base of the shield, a white rose, the badge of York, in remembrance of the Princes of that House and their visits to the City. As the home of the mother of all Parliaments, Westminster’s badge of a portcullis was chosen for a crest; behind this, on a green mount, is a gum tree proper, this symbolising the idea the garden city of Canberra is to be, and the Federal Capital Territory, the whole surmounted by an Imperial crown. The crest was made very complete, so that it could be used by itself.

Next came the most difficult part of the achievement to decide upon, namely the supporters. something graceful was wanted which was at the same time Australian...finally I had the idea of using two Australian black swans, the most graceful and unique of all the birds in the Commonwealth. Swans have been royal birds for centuries, that is, white ones, and Leach, the Australian ornithologist, says that nothing she has produced has done so much to advertise Australia as the black swan. So I put in two black swans as supporters, so the final sketch was made and copied and sent to the Heralds College...

...the Herald’s College had recently granted two black swans as supporters to the arms to the municipality of Perth, Western Australia, and were unable to grant them to Canberra....In this dilemma I at first found things looked rather awkward, but I presently had an inspiration I remembered the aborigine (sic) and the white sailor which were the supporters of the arms of the city of Sydney, so to make a parallel case I replaced the left hand black swan of the Canberra arms by a white one, and the idea was complete.

In October 1928 the Royal Warrant for the Armorial Bearings was issued and the College prepared the Patent of Arms, the Patent of Supporters and a painting of the full Achievement in November 1928. At the same time a second certified copy was requested by the Assistant Secretary, Prime Minister’s Department. It is this second copy that is held in CMAG’s permanent collection.